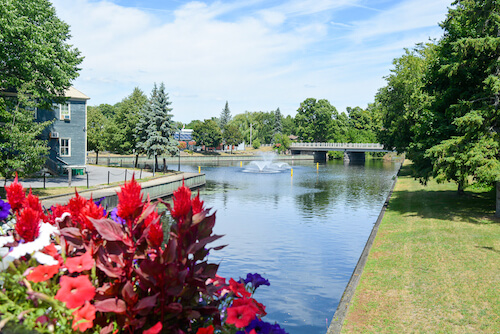 Perth is the next stop in my day trip series.

Our trip brought us to a place where the past meets the present and it’s called the city of Perth. Which according to TV Ontario has been called the prettiest town in Ontario and rightfully so. Not only does it have wonderful heritage architecture, beautiful historical shops, festivals and restaurants. The picturesque Tay Basin runs right through the middle of town and even creates two islands.

Perth is a beautiful town that boasts its historic roots dating back 200-years, in 2016 it celebrates its 200th anniversary. It was founded as part of a military settlement and has been marching forward since. The Perth Military Settlement was one of three strategic defensive outposts created along the Rideau Corridor after the War of 1812. The goal was to establish a reserve force along the Tay River in case of another conflict with the United States.

The town is located about 80 km southwest of Ottawa.

Did you know Perth is considered the Wedding Capital of Eastern Ontario? Neither did I but apparently every year, hundreds of couples make Perth the destination for weddings! Incredible, isn’t it? Perth is strategically placed in the heart of the Rideau Lakes District in Eastern Ontario, making it less than an hour drive from major centres like Kingston or Ottawa. If you are looking to get out of the city and celebrate your wedding in a charming, friendly atmosphere, Perth is where you need to be!

Once we got to the city the 1s thing we needed to do is find parking, which was not a problem as there are plenty of spots downtown we found a spot quickly, and I’m sure you will as well.

We then headed to Tourist office to get a map and find out about what to see in Perth. They were very friendly and gave us some good ideas on what to see before we started our adventure in this beautiful city. I broke down the list below to “my top 11 sites” there really is a lot to see so for simplicities sake I added a location that impressed me with a few pertinent details. Of all the cities I visited in my day trip series Perth is my absolute favourite! All the cities I visited have their unique charms, but Perth just has that something.

What to see in Perth, Ontario, Canada:

1. The Perth Town Hall. This magnificent Neo-classical structure was built in 1863 from local sandstone. Today it is a National Historic Site and houses the municipal offices.

2. The Mammoth Cheese or Big Cheese. Produced by the Dominion Department of Agriculture. In conjunction with the Canadian cheese industry for the World’s Columbian Exposition in Chicago in 1893, this Big Cheese was used to promote Canadian Cheese around the world. The mammoth cheese was made from 207,200 pounds of milk and in the end, was six feet high, 28 ft. in circumference and 22,000 pounds. 3.  Stewart Park, a scenic park right in the middle of town that is bisected by the picturesque Tay River. It’s home to various special events and festivals. The most popular is annual Perth’s Stewart Park Festival, which featured free concerts by more than 30 different musicians and musical groups. The park is also a popular destination for wedding photographers.

4. Big Ben. No, it’s not London’s Big Ben. It’s actually a monument to Ian Millar, a 10 times Olympic show jumper, and his horse Big Ben. It’s one of Perth’s most photographed monuments! They also won two gold medals at the Pan American Games and represented Canada in more than 30 Nation’s Cups. A beautiful bronze monument has been erected as a tribute to Ian Millar and Big Ben’s outstanding achievements.

5.  Hall of Remembrance – The Perth Legion has a unique Hall of Remembrance Museum containing thousands of Military artefacts donated by area men and women who served Canada in both World Wars and Korea. The Hall also has a collection of items representing foreign military services and Canadian Peacekeeping.  The Museum library has a large collection of Military reading material as well as a resource center. For more information, visit their website or call 613-267- 4400.

6.  Perth Citizens’ Band . The Perth Citizens’ Band is the longest continuous running Town Band in Canada dating back to 1852. The free concerts in Stewart Park are performed every other Thursday at 7:30 PM starting in the second week of June through the third week of August. The band participates in a number of parades throughout the year including the Perth Fair Parade, parades for various local celebrations in other towns and typically four Santa Claus Parades in various towns. For more information, visit their website.

7.  The Perth Farmers’ Market that is held every Saturday morning at the Crystal Palace next to the scenic Tay River Basin. The Crystal Palace, a large metal and glass pavilion of 4560 square foot is actually a former bus shelter that was brought in from Ottawa. It holds special events during spring, summer and fall and on this day it featured some live concerts as part of the Stewart Park Festival. At the Perth Farmers’ Market, you can purchase all sorts of fresh local produce, fruits, flowers, pies, meat, eggs and preserves as well as locally made crafts.

8.  Matheson House / Perth Museum. A National Historic Site! Matheson House, home of the Perth Museum invites you to come and explore the rich History in Heritage Perth! Outdoors, visitors will find a charming enclosed Scottish garden on the South side bursting with flowering plants and shrubs true to the era. An outdoor bake oven and herb garden can be found on the North side.

10.  Inge-Va is a stone cottage and frame garage outbuilding located on a 1 1/2 acre property on the southeast corner of the intersection of Craig and Wilson Street East in Perth, Ontario.  Built in 1823/24 of local sandstone, Architectural studies of Inge-Va has frequently referred to it as the quintessential example of the Eastern Ontario stone cottage.

11.  Bridge Master House and Swing Bridge on Beckwith Street. The bridge is a king post swing bridge and is the last surviving bridge that was built over the Tay River in 1888.  When the Tay Canal and the Tay Basin were completed in 1889 there were three such bridges.  At the edge of the bridge on the left side of Riverside Drive is the Bridge masters House that is a frame one-and-a-half storey building.

As I mentioned there is so much to see in this beautiful city! To find more information about the city, festivals etc. – http://www.perthtourism.ca/things-to- do and event calendar.

After many hours of exploring the city, we went to Maximillian’s restaurant for a lunch. It has a beautiful view of fountains, the restaurant menu offers European dishes in a nice Bavarian-style dining room, and you can sit out on the waterfront patio. Located centrally in town the menu is extensive and has something for everyone. We had onion soup (nothing similar with French onion soup) and fish stuffed pancakes  – I liked it! And the staff was very friendly.

At the Tourist Office, we also got recommendations to visit Mex & Co – A Mexican  and California-Style food themed restaurant with a beautiful view of the river. I will check it out next time for sure. They have a nice patio on the water.

Also you can visit a restaurant East Meets West  where they serve Italian, Indian and Canadian  food for lunch and dinner or Fiddleheads Bar & Grill (Upscale Pub Menu) with a wonderful patio overlooking Code and Stewart Parks.

If you love shopping, there are a lot of nice boutiques on Gore street – art, clothes, furniture, flowers, fabrics crafts, you can find anything you like.

In general, the trip was awesome except it was super hot – 32C so we could not walk a lot. I will definitely be back in autumn, It’s like a piece of Europe, If you miss Europe (like me) I would definitely recommend visiting Perth.

1. Park your car in downtown where you can find 3 big parking lots. 2 hours are complimentary (courtesy of the BIA Merchants).

2. Walk around. You can spend the whole day walking. Everything is reachable by foot.

3. Visit Stewart Park – it’s for sure very beautiful park. Now I understand why wedding photographers love it. I’m already married but would love to have a wedding ceremony there. Look at the pictures gallery to see what I mean.

4. If you are planning your wedding, check their website for wedding offers –  http://www.perthtourism.ca/weddings

Where to find great deals?  Sign up for FREE exclusive weekly updates